Kris here, one of the writers for Vampire: The Masquerade – Coteries of New York and the game’s lead designer. As you’re waiting for new visual materials for our story-focused title, we wanted to give you a glimpse at some of the things we need to take into consideration while crafting the characters who you will interact with over the course of our plot.

Vampire: The Masquerade is almost 30 years old at this point, and has had plenty of lore built for it, much of it related through the various sourcebooks, novels, and games over the last three decades. For us, the main source for inspiration and a key resource in deciding on who the vampiric denizens of World of Darkness’ modern New York City are, was New York by Night, written for use with Vampire’s Revised Edition in 2001. That book builds a vision of a city that’s recovering from an intense takeover by the Camarilla, and is still under something of a martial law. However, New York by Night’s goal was to set up a delicate political space so that the player characters – no matter how influential or not they were – could make a difference. 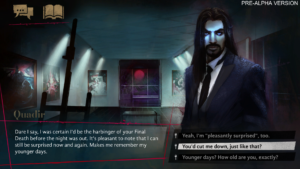 Flash forward 15 years, and the city gives the impression of stability. By taking the established characters from New York by Night as a jumping off point, and developing from there, we had to think about the political landscape and personal motivations of the city’s key players. As you will find when you play the game, we kept some things familiar, while taking a few of the characters in directions that we hope you will find pleasantly surprising. Of course, this being Vampire you can be certain that a metropolis as big as New York City cannot remain perfectly still and free of intrigue among the Kindred…

Of course you will see new characters too, created to fulfil their unique roles in our narrative. Chief among them, Sophie Langley (who you can see in our game’s key art), is an original addition to the established New York by Night cast, who the protagonist will have a close relationship with. In creating Kindred such as Sophie, we had to think of three things: where did they come from, when did they arrive in NYC, and what they are up to. Out of these three, their motivation is obviously most important, but their background helps inform the ways in which they wish to fulfil their ambition.

And then we have to come up with the characters’ voices. How do they speak? What kind of language do they use, modern or dated? Are they direct or will they only hint at what they want? This is a process that we have to go through with almost all of the characters, since even those already established in the past are usually left for the Storytellers to flesh out in their home games. In the rare exceptions where the official sources suggest a voice for the character, we take that into account and build from there.

The characters you’ll meet in Vampire: The Masquerade – Coteries of New York will be believable, fleshed-out and rooted in reality. The World of Darkness is not our world, but when creating fiction inspired by real-life places and events, we need to carefully consider representation, cultural context and what the way we present our characters says about them and their surroundings. We all hope our attention to detail will shine through in the final game, and provide all players with an experience that’s authentic-feeling, memorable and entertaining.

And, most of all, just a worthy addition to the long-running Vampire: The Masquerade tradition of storytelling.